Gemtlemen: What is Tourbillion And Why Does It Work? Okay, Let’s Get Into It:

In horology, a tourbillon (/tʊərˈbɪljən/; French: [tuʁbijɔ̃] “whirlwind”) is an addition to the mechanics of a watch escapement to increase accuracy. It was developed around 1795 and patented by the French-Swiss watchmakerAbraham-Louis Breguet on June 26, 1801. (Wikipedia)

In the late 1700s, famed watchmaker Abraham-Louis Breguet came to the realization that gravity was having ill effects on the accuracy of his timepieces. Horology at the time was confined to the pocket watch, which was constantly stored vertically in the user’s pocket, then stored on a table horizontally. Spending the majority of its time stuck in that vertical and horizontal orientation put strain on the hairspring inside the escapement, causing it to oscillate at an irregular rate, decreasing the accuracy of the watch.

The onslaught of quartz watches almost killed the mechanical watch industry in the 1980s. As a result, some clever people in Switzerland decided that the mechanical watch would fight back by transforming itself into almost exclusively a luxury item. The more complicated the movement, the more luxurious it would be. The concept was far from new, being borrowed from the reality that very complex watches can be extremely difficult and time consuming to produce. This undeniable fact is a cornerstone of why some mechanical watches are extremely expensive.

Why is the Tourbillon So Expensive?

In spite of the tourbillon’s uselessness, they’ve remained common among the uppermost echelon of the watch market. Most Swiss-made examples start at around $40,000 and price tags often break the six-figure barrier. This is because tourbillons are arguably one the most difficult watch movements to make by hand. The tourbillon mechanism is tiny, weighing in at under a gram, and is usually crafted with more than 40 parts, finished by hand and made from lightweight metals like aluminum and titanium. They require a special set of tools and a lot of time to make. For example, just to make a single A. Lange & Söhne Tourbograph Pour le Merite watch, its tourbillon chronograph movement takes 18 months.

So it Takes a Long Time, What’s Changed?

Manufacturers have been able to make affordable tourbillons by streamlining manufacturing and utilizing less traditional production processes. “Today we have production methods which allow us to produce spare parts in extremely high precision and acceptable quality,” independent haute watchmaker Thomas Prescher said in an interview with Europa Star. “So it is already possible to have extremely cheap tourbillons for about $250.”

Which Gemtlemen Watch Has The Best Tourbillon? 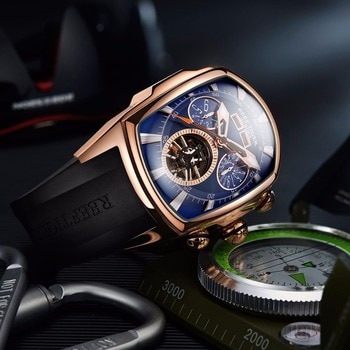 Sapphire crystal, Swiss Engineered Tourbillion, Water Resistant and Ready for Anything
You haven’t seen anything like it, but the name says it all. Something like a tiger, beautiful and athletic, powerful and fast. Supremely accurate. All qualities that a man must possess in order to pair with this elegant timepiece. You may wear it on the weekends, when it’s time to play with your other expensive toys. Even when dressed down, it’s still impressive to every witness. You have a reputation to uphold, a score to settle, and you are going to enjoy every moment to the fullest.

Tourbillons are very unique to Swiss Watchmakers, and highly sought after in the industry due to their rarity and difficulty to produce. Throughout history, they have long been associated with expensive and luxurious tastes. Modern practices have allowed for watch makers to significantly reduce the price, making these options available to consumers and retailers like us.

When it comes to price, our Tourbillon watch is a steal of a deal, but we have to tip our hat to the swiss for defining the value of such an important item in the industry. Thanks to them, we are able to connect and educate a new generation of enthusiasts. We are a new modern company, and it is our goal to connect to a new wave of consumers, by embracing tradition and history, but also branching out into new currents of luxury, passion, and culture.

Brush to Blush: The Ins and Outs of Victorian Makeup